BROCK DAVIS ON THE ART OF THE PERSONAL PROJECT 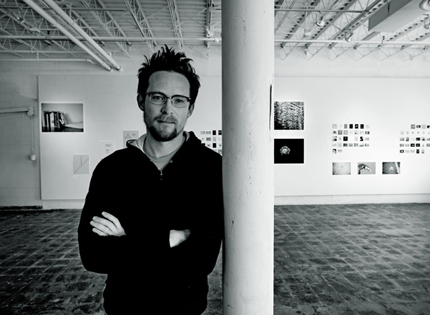 Brock Davis is an award-winning, multidisciplinary artist and creative director with a knack for creating ground-breaking work. Brock has worked in advertising for the past 17 years. Most recently as group creative director at Carmichael Lynch, Brock concocted the memorable “Messin’ With Sasquatch” campaign for Jack Links Beef Jerky as well as compelling work for Subaru, Harley-Davidson, Porsche, Rapala and many others. His work has received national and international acclaim, acquiring every notable industry award including the prestigious Cannes Lion.

When he isn’t busy making ads he’s busy making other things, like one piece of art every day for a year in his “Make Something Cool Every Day” project, and t-shirt designs for his line of Brock Davis kid’s tees at Target stores. He is a regular contributing artist to the New York Times, Wired, Esquire, Fast Company, O Magazine and recently created the October 10, 2011 cover of Time magazine. His professional and personal work is viewed and shared millions of times over. He has been written about and featured on NPR, USA Today, Wired, Comedy Central, G4 and Boing Boing among others.

Your work has a common thread throughout, in that it doesn’t take itself too seriously. It’s delightfully whimsical and witty. Is that an accurate reflection of how much fun you’re having while you make it?

I have a lot of fun because the process of creating something out of nothing is fun. I’m always in pursuit of originality. I like to think that, creatively speaking, there is always something new under the Sun, it just needs to be discovered. I think that pursuit can make for some interesting work. When I think of ideas it is not a structured process for me. I’m thinking all the time and often do my best thinking when doing mundane things like washing dishes or mowing the lawn. 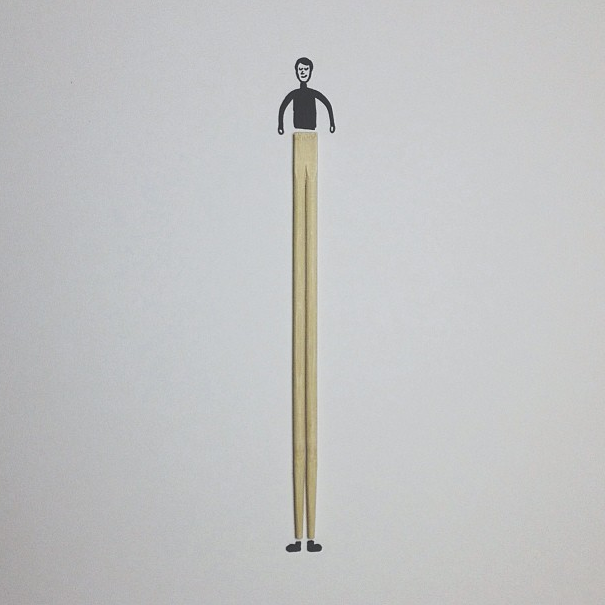 It seems a big chunk of the work on your site has been a spin off of the #MakeSomethingCoolEveryDay project. (Ed: A web project encouraging designers and other creatives to well, make something cool every day. See: http://www.flickr.com/groups/1012163@N22/) That’s a huge commitment. I’m sure many designers would find it sapped time and creativity away from other projects or client-based work. But it seems it’s almost helped you become even MORE prolific. How did your manage to balance your workload, creativity and sanity during that period?

When I started MSCED, my original motivation was to never miss a day and complete the project January 1st through December 31st. I realized that this commitment would be difficult. I gave myself rules. It could never get in the way of family time and it could never get in the way of my regular job, which, had it’s own creative needs and demands. Also, I wanted my pieces to be the absolute best they could be, regardless of the circumstances surrounding that particular day. Honestly, I think my brain was ready for a project like this to come along. I think it was looking for a challenge. I had accomplished some creative goals in my job and I think I needed more outlets. The timing was perfect. You are right, the project did help me to become more prolific. To work faster and more efficiently, yet while still maintaining a high level of execution.

Ordinary things can be extraordinary, sometimes they just need a little help.

Overall, the most important thing I learned was to be more observant and to start paying attention to all the little things in life that I never think about. Ordinary things can be extraordinary, sometimes they just need a little help. I realized how much this project reverted me back to childhood. When you are a child, everything is new and interesting.

How much of your work would you say makes it through the creative process alive? What’s your idea survival rate?

Whenever I have an idea, I do what most people do and I write it down…usually on a stickies in my laptop or on the notepad in my phone. I’ll put them all in a master list and go through them and see which ones I feel excited about. I can usually tell which ones will be successful based on how I feel about them. I don’t discard a dumb idea, I’ll write it down as well, even though I may already think it will need a lot of work. Dumb ideas can lead to something great, or become great themselves with a little more thought. Sometimes I’ll have an idea and I’ll be so excited about it, I’ll have to drop everything and make it immediately. I think when an artist feels this compelled and driven towards an idea, it pours into the execution and resonates when people see the final piece.

This project reverted me back to childhood. When you are a child, everything is new and interesting.

Compared to other creative types, I get the impression you’re a bit of a Jack of All Trades. Photographer. Illustrator. Thinker. Would you agree? And what do you think are the pros and cons of being a specialist versus dabbling in lots of areas?

Honestly, I don’t think there are any cons. I believe execution needs to be versatile in order to work with specific ideas. Some ideas resonate more when photographed, others must be illustrated or sculpted. If an idea that works best as a photograph is illustrated, it may compromise the purity and strength of the idea. I am usually pretty good at determining what discipline is best for a piece. A lot of times, I will have a clear vision in my head as I think of a piece and that becomes the blueprint I go by. Sometimes that vision may be something I’ve never done before executionally, but I like the challenge of learning new disciplines in order to bring an idea to life. There is always something new to learn, I try to always be a student of creativity. 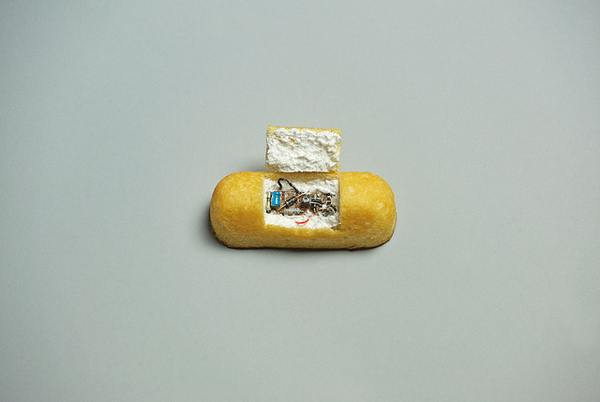 When you’re not playing with cauliflower, you’re also a Creative Director for an ad agency. Do you get much opportunity to cross-pollinate your side projects with ideas from your day job, and vice versa? What are some of the pro’s and con’s of the two?

I think personal projects are essential for creatives in industries like Advertising and Design. Obviously, creativity can and does exist in the confines of a business. But it also needs to be untethered and allowed to run free. Having creative outlets outside of work has always helped keep my thinking fresh and spontaneous. A business environment structures creative work. This is good for learning how to create efficiently and to work within limitations and rules. It’s also good for learning how creativity and ideas can be used to solve problems and create personality for products and services that otherwise had none. But there needs to be an escape hatch, at least for me. 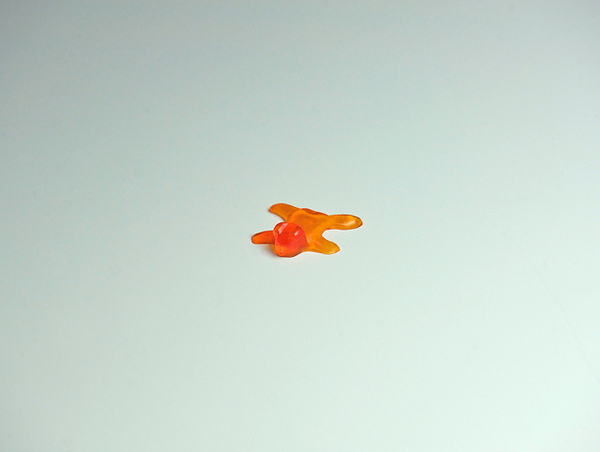 Can you give us a bit of insight into your creative process? How does an idea make its way from a synapse firing in Brock Davis’s brain, to a fully finished project on the interwebs? What kind of computer/photography/software setup are you using for your projects?

It seems that most of my better ideas come out of nowhere and are completely random and often unrelated to anything I am doing at that time. For me the goal is for both arms to be strong. Idea and execution. Sometimes I’ll have a vision in my head that starts from execution and works back to an idea. Most of the time I’ll have the idea, then I think best on how to execute it in order to give it the most life.       Once I have an idea, I’ll jot it down. I may have the vision of the execution in my head already. I’ll think about what I need to execute then I’ll begin. There is a bit of trial and error. Sometimes I’ll make a piece and realize that it isn’t as good as what I imagined. I remember when I was making Rice Krispyhenge, I had the idea while raking leaves. I imagined the little pieces of the cereal and I thought it could be possible to use small amounts of super glue and tweezers to build the piece. I did some research and found several aerial shots of Stonehenge. I built the structure on a piece of white foam core while looking at the Stonehenge image on my laptop.       Once I had the piece built, I started taking photos. Something wasn’t right. I wasn’t really liking any of the shots. After thinking about it, I realized it was all in the lighting and the amount of space surrounding the structure. I took over 100 shots and finally, I got the lighting perfect so that it felt like a warm, low Sun, that brought out long shadows in the structure. I think it was important to see the shape of the pieces in the shadows. That’s one of the things that makes photos of Stonehenge interesting. Also, I wanted there to be a lot of space around the image, this would help make the rice krispies feel small. Cropping in too close gives a little more detail, but it doesn’t feel right. Execution is a meticulous process. 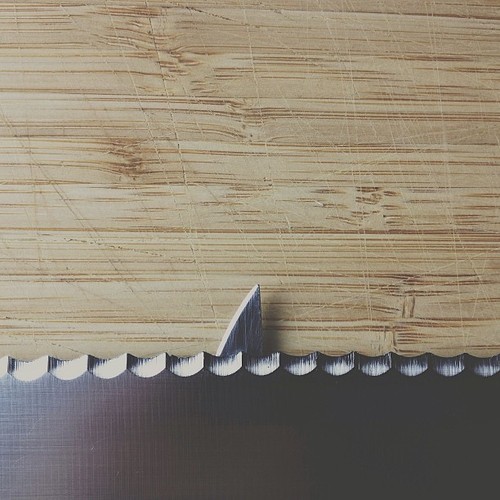 What’s next for Brock Davis? Can you give us a sneak peak into any work in progress?